Home / BLOG / Emotional advertising can lift sales as much as 23%, but marketers are missing the mark

Where ideas on creativity and results come together.

Emotional advertising can lift sales as much as 23%, but marketers are missing the mark

After more than 40 years in marketing and advertising, Louis Sawyer, the chief strategy officer for ad agency Brunner, has come to believe that we are defined by the brands we choose to buy.

To prove his point, Sawyer once asked a room full of students at Emory University if they could describe a friend using only brands and have their other friends know who they were talking about.

“They all started laughing because they could do it,” Sawyer recalls. “There are rational reasons for the brands we consume, but it also says something about us or how we want to be perceived. And that’s an emotional expression, even though there’s logic to it.”

Emotional marketing is an ironically scientific approach, one that takes into account the inner workings of the human brain, Sawyer explained. Emotion and motivation reside in the right side of the brain, while analysis and logic live in the left. That left side is good at thinking through multiple options and weighing the pros and cons, but it’s not so great at pulling the trigger on a decision.

That job, for the most part, rests with the right, more emotional side of the brain.

That’s why emotional marketing can be a powerful tool for businesses, as evidenced by a 2016 Nielsen Consumer Neuroscience study that revealed ads with an above-average emotional response from consumers caused a 23% increase in sales compared to average advertisements.

Yet many businesses don’t tap the potential. A recent survey conducted by Brunner and the Atlanta Business Chronicle found that while almost one-third of respondents say they prefer their marketing campaigns connect with clients on an emotional level, the majority of companies are not fully tapping into emotional drivers in their storytelling. 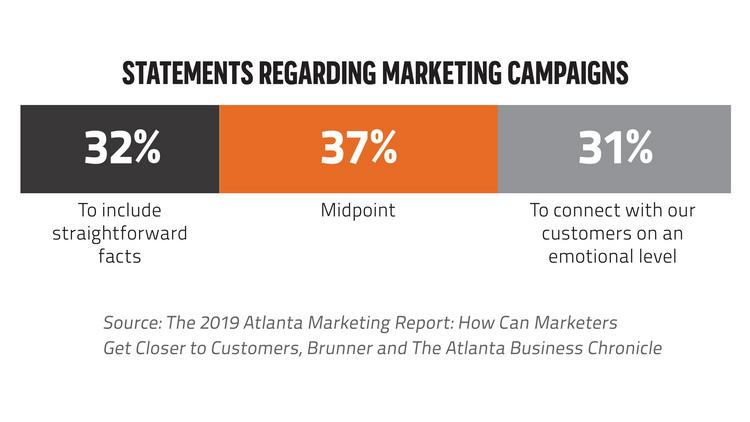 “It’s hard to deal in emotions. It’s hard to quantify it. It’s hard to go to a very rational board and say, ‘We’re about to spend several hundred thousand dollars to create feeling,’” Sawyer said. “They need a decision that passes the red-faced test: ‘Am I going to be able to justify that in a way that doesn’t embarrass me?’ That goes back to rational, logical, feature-based communications that oddly enough appeal to the organization more than the audience they’re selling to.”

The emotional approach isn’t limited to specific types of businesses or products, Sawyer said. Brunner works with a commercial-grade cleaning supply company, for instance, and it is going all-in on emotion.

“It’s a professional-level product, and our message is, ‘If you want to take cleaning to a higher level, then this might be the product for you.’ That sounds very rational, but it’s actually a very emotional appeal: ‘I’m not a pro, but I want to feel like it,’” Sawyer said.

For businesses that have never employed such a tactic in their marketing, there are some ways to ease into the process, Sawyer said.

“Online, we can start looking at who’s only inquiring versus who’s inquiring and buying, and we can try to understand the difference,” he said. “They both are trying to find the same product, but there is a reason for those who bought versus those who didn’t buy, and that often leads you into finding the emotional barrier”

Another exercise to find key emotional drivers is to draw a line down a sheet of paper and, on one side, list the rational reasons someone would buy your product and why he or she would buy it over another product. Then, on the other side, list the emotional reasons they would choose your business over the competition. That allows companies to hone in on the connections between emotion and logic and appeal to both, he said.

As another example, Sawyer told the story of a longtime friend who bought a Mercedes after a lifetime of practical car purchases.

What made the difference was a car that sparked an emotion, he continued.

“So often the marketplace conspires to make brands into commodities. The market’s also conspiring to make products more similar than different,” Sawyer said. “So more and more, as a product matures, emotional differentiators are what separate us.”

For your free copy of the Brunner 2019 Atlanta Marketing Report, visit go.brunnerworks.com/atlanta-business-chronicle and find out how Atlanta-area brands connect with their audience throughout the buying process — and where opportunities exist.

Brunner is an independent, Atlanta-based marketing agency, 100+ people strong, with 35 years of evolutionary experience based on “what’s next.”

Mary Johnson is a freelance writer for The Business Journals Content Studio.